The Secrets behind High-Quality Synthetic Crystals

From clocks and communications equipment, to electronic devices such as computers and digital cameras, to vehicle and cellular base station communication networks, Epson's crystal devices such as crystal units and oscillators are found in countless electronic products and equipment. Epson also manufactures the crystals used in these crystal devices. In addition to raw materials and advanced manufacturing technology, the manufacture of high-quality synthetic crystals requires true craftsmanship to achieve consistency. Here, Epson, one of the world's largest crystal device manufacturers, gives you a glimpse into world of synthetic crystal manufacturing. 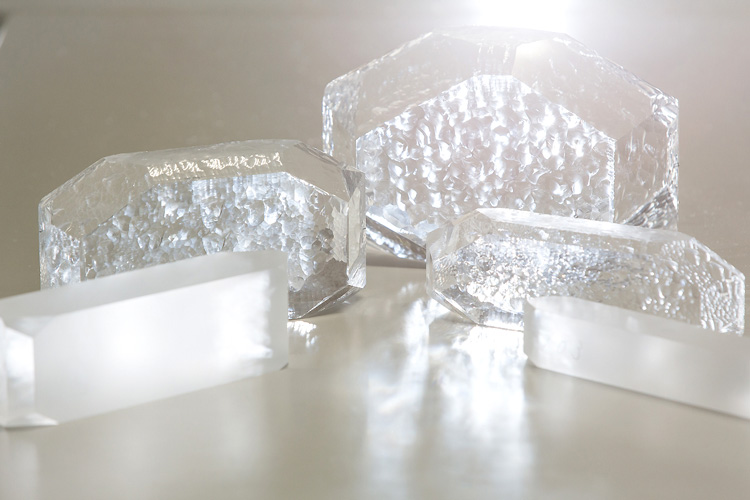 Applying mechanical pressure to a crystal produces electric polarization and generates a voltage. This phenomenon is called the direct piezoelectric effect. Conversely, applying a voltage to a crystal causes it to expand or contract. This is called the inverse piezoelectric effect. Crystal devices utilize this property to stably generate signals with a constant frequency. Depending on the crystal device, you can create a frequency reference signal or select a frequency. For example, when multiple devices such as wireless LANs and smartphones are communicating, a crystal device is needed in order to output a synchronization signal to control the timing of connections and to keep the time of clocks in the electronic devices accurate. Crystal devices are also used in sensors that detect changes in speed and movement. These ubiquitous devices are indispensable in the modern world. 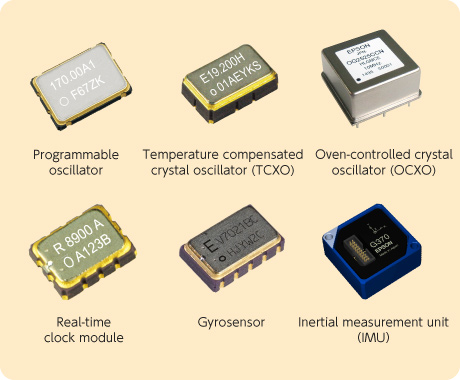 How synthetic crystals are made

Synthetic crystals are grown in autoclaves using lasca (fragments of natural crystals that serve as nutrients) and seed crystals. The autoclaves have a heated cylindrical chamber that is divided into two halves: a crystal growth zone in the top half and a dissolution zone in the bottom half. First, the lasca is washed and dried before being placed in the dissolution zone. Seed crystal strips are hung in the growth zone, and an alkaline aqueous solution such as sodium hydroxide or sodium carbonate is poured into the dissolution zone. The top cover of the autoclave is then closed and sealed, and the temperature and pressure inside the chamber are raised. The crystal growth zone is cooler than the dissolution zone. This difference in temperatures creates natural convection so that the saturated solution of silicon-dioxide that is created when the lasca dissolves in the alkaline aqueous solution rises into the crystal growth zone. The saturated solution that has risen becomes supersaturated as the temperature decreases. This causes SiO2 to be deposited on the seed crystals, causing them to grow large.

In the latter half of the 1950s, Epson began research and development that aimed to grow synthetic crystals on an industrial scale. In the 1960s, Epson began full-blown industrial production of such crystals, although the first synthetic crystals grown were inferior to natural crystals. We therefore had to repeatedly adjust the manufacturing conditions, parameters such as raw materials, temperature, and pressure. We also had to modify the manufacturing equipment, including the internal structure of the autoclave. Eventually, we were able to consistently produce synthetic crystals that were equal or superior in quality to natural crystals. 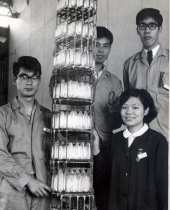 The autoclaves currently used in production are massive-about as tall as a four- or five-floor building. They are heated to 360℃ and pressurized to between 1,100 and 1,700 bars to grow large, high-quality synthetic crystals. It takes anywhere from two to six months to grow crystals, during which time even slight changes in temperature and pressure can affect crystal quality, so conditions inside are strictly controlled and maintained.
After completion, the crystals are carefully raised out of the vessel by an experienced technician, checked for quality, and processed into products.

In addition to the quality of the raw materials and seed crystals, the performance of the autoclave, and manufacturing conditions, which must be strictly controlled and maintained, the manufacture of high-quality synthetic crystals requires craftspersons to keep the equipment in ideal condition. The autoclave chamber is the most important factor in the manufacture of synthetic crystals. The high temperature and pressure must be safely maintained for up to six months, so even the slightest distortion of the sealing surface is unacceptable. After use, the sealing surface needs to be precision corrected. This requires micron-order accuracy and, ultimately, hand-finishing. This is where the need for master craftsmanship comes into play.

Epson has numerous technicians who are master craftspersons, including some who have been recognized by the government of Japan with a Medal with a Yellow Ribbon. Some are involved in the manufacture of synthetic crystals. We are also focusing on developing master craftspersons for the future and provide training throughout the year to the technicians who support our production lines.

The skills that our technicians have accumulated, combined with advanced manufacturing technology, have made it possible to manufacture consistent, high-quality synthetic crystals.