In precision work such as assembling delicate parts or fitting parts in narrow gaps, tiny force adjustments are required that depend on human senses. Epson has developed force sensors that use the quartz crystal piezoelectric method, one of Epson's specialty sensing technologies. This technology provides robots with the human senses that are indispensable to a person performing precise work.

A force sensor can detect the magnitude of force and rotation direction for each of the x, y, and z axes. The following three functions are required for a force sensor used in combination with a robot.

When a force sensor is installed and linked to a robot, the robot becomes able to detect minute force changes and the rotation direction to a high sensitivity level. Controlling the robot based on the detected force information enables operations that were previously performed based on human touch sensations to be performed by the robot. The force sensor provides the robot with human-like senses and is an essential device for the automation of complex work.

The requirements for a force sensor installed in a robot are the ability to detect minute forces while also affecting robot precision as little as possible. Most conventional force sensors measure the amount of deformation (strain) of a part inside the sensor when the object is pressed. When the object is pressed by a weak force, the deformation amount is small and hidden by noise. Conversely, to detect minute forces, a structure that makes it easy to deform the sensor part is required. This reduces the rigidity, causing a problematic drop in robot precision.

As a result, the Epson force sensor is highly rigid while also being capable of highly precise detection, from minute forces of 0.1 [N] to the maximum pressing force of 250 [N]. In addition, because robot control can use values from the highly rigid force sensors that do not impair robot precision, these force sensors are the optimal type for robots.

Epson has installed force sensors in its SCARA robots and six-axis robots, refining them during use at Epson's own factories. Robots combined with force sensors can be used for precision work such as contacting, surface matching, probing, profiling, and pressing.

Epson RC+ is available as software that integrates Epson's robots and sensing technologies. Epson RC+ enables force sensors and robots to be connected and linked with intuitive and easy-to-understand operations. Furthermore, the software can use force sensor information from the same development environment as the one used for controlling robots. This eliminates the time required for linking sensors and robots, and for building a development environment, enabling the smooth launch of application development.

The simulator in Epson RC+ is useful for studying issues such as robot movements and interference with the surrounding area without needing to use actual robots or force sensors. In addition, the operator can use the direct teaching function incorporated in Epson robots to teach operations to six-axis robots by directly moving the robot's hand. Operations can be taught not only on the PC, but also at the worksite, enabling application development to be completed in a short period of time. 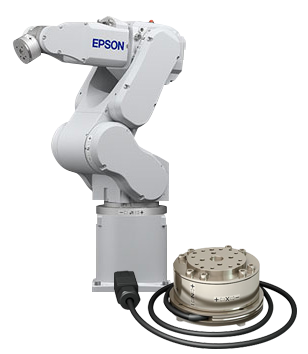 Force sensors enable the automation of many processes that were previously operated based on human touch sensations. They can also quantify minute force and torque changes that cannot be distinguished by human senses. As a result, the sensors can detect abnormalities during operation to prevent defects from flowing to the next process, and the recording and monitoring of forces and torque keep systems in the optimal condition at all times.

The automation of work that previously could only be performed by humans is an effective measure for resolving various issues faced by the manufacturing industry, such as labor shortages and technological succession. Furthermore, combining vision sensors with force sensors expands the range of processes that can be automated. Providing robots with human-like "eyes" and "hands" enables them to replace humans in operations such as inserting flat cables or other soft wires, which has been difficult up to now.

In the future, Epson will continue to contribute to improving productivity by expanding the application of industrial robots using force sensor technologies to automate high-precision work that has been difficult to do at conventional manufacturing worksites.