Seiko Epson Corporation (Suwa Seikosha at the time but referred to hereafter as Epson) developed what is widely accepted to be the world's first quartz watch, the Quartz Astron 35SQ, in 1969. Mechanical watches had a daily rate (the amount of time a watch gains or loses over a 24-hour period) of a dozen seconds or more. Quartz watches revolutionized watches by bringing an entirely new level of accuracy-a daily rate of just ± 0.2 seconds.
In 2012, 43 years after the development of the Quartz Astron, Epson again brought a revolution by developing the 7X series, the world's first GPS solar watches.

The radio signals used by ordinary radio-controlled watches are time calibration signals transmitted from terrestrial transmission stations. These time calibration signals have a service area that is limited to the areas around transmission stations in several locations in Japan and around the world. Epson wanted to provide radio-controlled watches that keep accurate time anywhere in the world and therefore turned its attention to the development of a global positioning system (GPS) as the solution.

The U.S. has a constellation of GPS satellites that fly at an altitude of about 20,000 km. The satellites are arranged in six orbital planes, four in each orbit, and have an inclination angle of 55 degrees. Each satellite circles the Earth twice a day. There are about 30 GPS satellites in total, but the number in operation at any one time varies depending on spares and maintenance. The U.S. is committed to keeping 24 of them available at all times. Since multiple GPS satellites can always be seen regardless of where you are on Earth, a GPS watch can receive information from multiple GPS satellites and use triangulation to calculate your current position (latitude and longitude).
GPS satellites are equipped with cesium and rubidium atomic clocks that have an error of less than 1 second per 100,000 years, which is higher than the accuracy of crystal oscillators used in quartz watches. They constantly transmit time information synchronized with UTC (Coordinate Universal Time).
GPS was first developed for military use by the US Department of Defense in the 1970s, but in the 1990s it was opened to the world for civilian use. Epson's GPS solar watches capture GPS signals from these satellites to maintain accurate position and time data.

In the latter half of the 19th century, the concept of time zones came about. Since the Earth rotates 15 degrees longitudinally every hour, it was divided into 15 time zones (360 degrees / 24 hours = 15 degrees). However, over time, governments have set their own time zones, and in 2012, when Epson's first GPS solar watch was developed, there were 39 time zones. To accurately determine the time in each region, it is necessary to automatically determine not only the latitude and longitude but also the time zone. Epson's GPS solar watches automatically determine this, enabling them to display the accurate time anywhere in the world.

GPS watch users can capture position information and correct the time zone in as little as 30 seconds with a simple operation. On the other hand, in daily life where one does not change time zones, the watch determines whether signals can be received without user intervention. So, as long as there is signal reception, the watch automatically receives only time information. It takes as little as six seconds to maintain the accurate time.

Development of a new antenna to receive weak GPS signals

GPS signals are very weak because they are sent from GPS satellites some 20,000 km above Earth. Epson thus needed to develop an extremely sensitive antenna to capture these signals. The antenna we developed is ring-shaped and sandwiched between the movement, which is encased in metal, and the glass. It is installed such that it follows the outer circumference of the dial. The antenna is covered with a bezel and dial ring made of non-conductive materials that allow radio waves to pass. This design gives the antenna wide directivity and high sensitivity to radio waves from the direction of the dial.

The watch reliably catches signals and keeps accurate time almost anywhere in the world and even in urban canyons, where buildings interfere with GPS signal reception, and even when the wearer is on the move. The antenna pairs functionality with aesthetics as a watch. 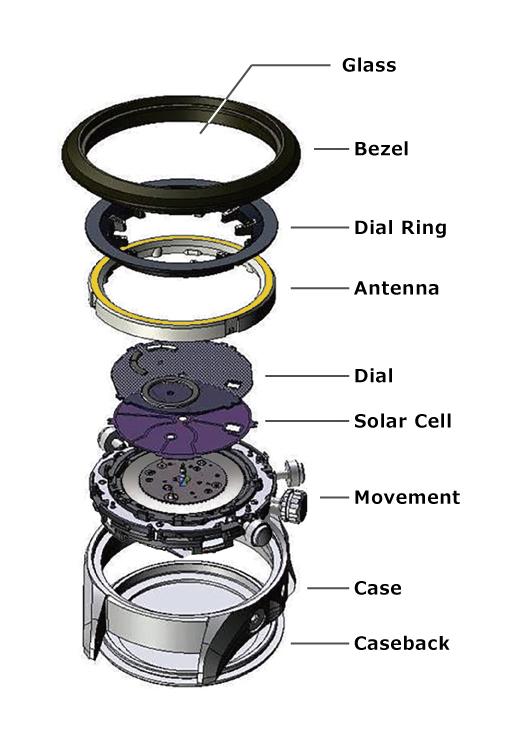 Solar watches obtain power by converting the light energy from the sun and indoor lighting into electrical energy. Epson's GPS solar watches are powered exclusively by light energy, so a system for stably and continuously supplying the energy obtained from light was needed. Epson maximized the power generating area by arranging the solar cell under the dial and secured the energy required for GPS functions by converting the light that enters the dial into electrical energy that is stored in a secondary battery. This photovoltaic system is what powers the watch. 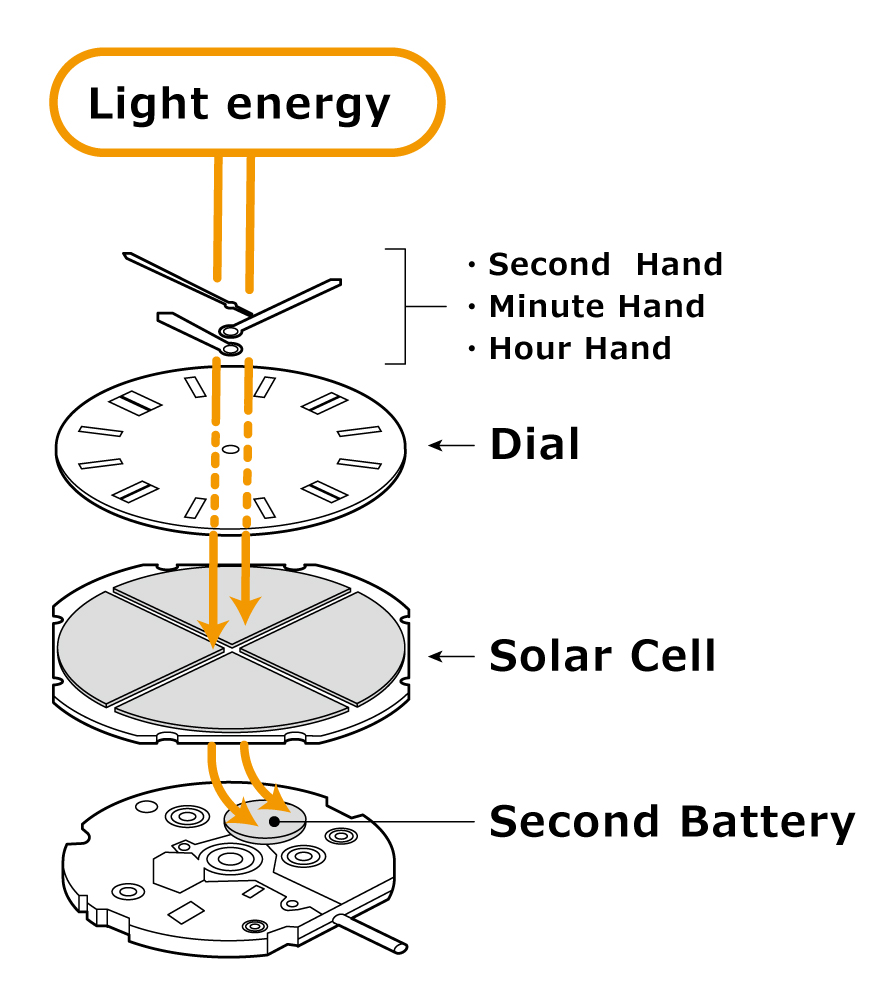 Epson began developing GPS modules in 1996 and took on the challenge of developing new technology, such as GPS signal processing technology, for them. One of the goals from the very outset was to develop and apply GPS technology to watches. As a result, Epson ended up engineering a GPS module that operates on about one-fifth the power of conventional GPS modules used for mobile phones. This unique technology lowered power consumption to the point where Epson's GPS solar watches can run exclusively on light energy.

Of course, developing this technology was no easy task. GPS signals contain a lot of information that requires a lot of energy to process. The pride that the developers of the GPS solar watch took in creating a watch that processes this information yet runs exclusively on light energy is a mindset that Epson engineers have consistently demonstrated over decades.

GPS solar watches continue to evolve. The first-generation 7X series, developed in 2012, was followed by the 8X series, in 2014. The 8X series featured an improved GPS module. It consumed significantly less power and could be charged with about half as much light as a 7X series watch. It also sported a beautiful dial, with an improved texture and excellent light transmittance. In addition, every part of the movement was meticulously analyzed to save space. The result was a watch head that was about 30% smaller and had a sleeker, more refined look.

The 5X series, developed in 2018, is Epson's third generation of GPS solar watches. We focused on advances in terms of both size and design. The outer diameter of the 5X series is smaller than that of the 8X series, but the area of the dial is wider, providing better visibility. Power consumption was further reduced. The 5X series consumes about 1/4 the amount of power consumed by the first-generation 7X series and about half that of the 8X series. The satellite search capabilities were improved by developing entirely new parts related to reception performance. Time correction, which took at least six seconds on the first generation, takes as little as three seconds on the latest generation.
The 3X series, developed in 2019, is a smaller, more comfortable size for women. It has a simple design and good usability.
In addition, all Epson GPS solar watches since the 8X series are compatible with Michibiki, Japan's quasi-zenith satellite system, and achieve an even higher rate of reception success in Japan.

The GPS solar watch was selected to receive the Minister of Education, Culture, Sports, Science and Technology Award at the 2016 Kanto Region Invention Awards sponsored by the Japan Institute of Invention and Innovation in recognition of Epson's commitment to the relentless pursuit of groundbreaking technology and to advancing performance and accuracy.