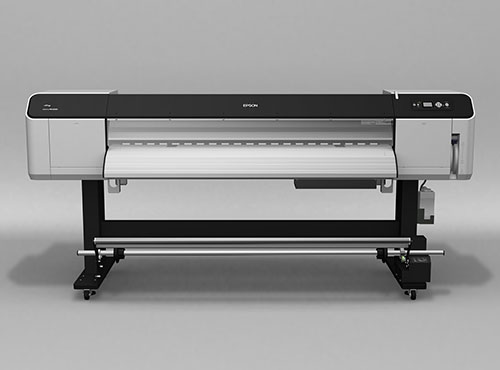 First launched in the United States, the Epson Stylus Pro GS6000 was Epson's first large-format printer for signage and displays requiring ultra-high-image quality. With cartridges containing eight different colors of solvent-based ink, including a new orange and green, the printer offered a stunning color gamut equal to that of an aqueous inkjet printer. It excelled at reproducing product package colors, corporate colors, and other special colors* with amazing fidelity. Where it really excelled was in the production of signboards and other product advertisements, where exacting reproduction of product photographs and special colors is essential. The GS6000 offered both extreme print quality and high productivity thanks to standard features such as a dual array of hyper-fast Micro Piezo printheads, high-capacity ink cartridges that could be hot-swapped during production without interrupting a job, and an automatic roll media take-up reel system for printing long banners, large jobs, or even continuous printing overnight.
The printer's eco-solvent UltraChrome GS ink, which is virtually odorless and contains no carcinogenic nickel compounds, was considerate of both workers and the environment.
* Colors that cannot be reproduced with a standard four-color ink set but that normally require pre-mixed inks.

Story Behind the Creation

Signage and advertisements located outdoors or in semi-exposed places such as train stations need to be able to resist fading, deterioration, and other changes caused by exposure to the elements. That is why professional production companies at the time were using large-format printers with solvent inks. While weatherproof, these solvent inks also had serious drawbacks, including producing fumes that were unpleasant and unhealthy for workers. In addition to the health and environmental concerns, other changes were afoot that were making color fidelity and image quality even more important. One was a shift in demand away from text-heavy advertisements and toward advertisements featuring product photos. Another was the increased use of indoor advertisements in shopping centers and railway stations, where they were subject to close scrutiny.
Epson sought to ease these problems by developing a large-format printer that could achieve amazing image quality with safer ink. The result was the GS6000 and an all-new eco-solvent called UltraChrome GS ink.

Epson's avowed strategy is to use Micro Piezo inkjet technology to bring about change throughout the printing sector. The new eco-solvent ink and the GS6000 opened the door to the signage and graphics markets for Epson. This ink combined protection against the weather with a wide color gamut thanks to the eight-color ink set with orange and green. That, plus the terrific image quality for both indoor and outdoor signage application, won the GS6000 great market reviews. Appreciative of the extreme print quality and color accuracy, printing professions began using the GS6000 not only for indoor/outdoor signage but also to reproduce works of fine art on canvas media, thus carving out new markets and applications that Epson planners never envisioned.