The world's first digital quartz watch with a six-digit LCD 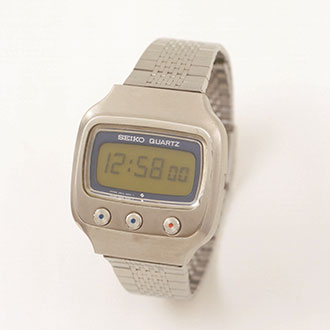 The Seiko Quartz LC V.F.A. 06LC was a fully-electronic watch that used the world's first six-digit liquid-crystal display to indicate the time. Capable of continuously displaying the hour, minutes and seconds on a field-effect liquid crystal display that Epson* developed for quartz watches, this groundbreaking digital watch attracted wide attention when it was first marketed in October 1973.

The most important feature of the 06LC, as the watch came to be known, was its driving mechanism. An analog watch indicates the time with hands that are turned by a stepping motor. The stepping motor's movement is controlled by electrical signals that are synchronized with a time standard based on pulses from a crystal resonator. In contrast, the digital quartz 06LC was designed such that the electric signals were sent directly to the liquid crystal panel, where they were converted to digits on the display. The internally developed LCD was long-lived (50,000 hours) and had good contrast. A lamp provided enough illumination to make the numbers on the display easy to read, even in the dark. The timepiece boasted some very user-friendly features. Users could, for example, set the time down to the second with pushbuttons, or reset the hour and minute independently.

Having achieved success with the 06LC, Epson set it sights on building the LCD business by developing applications for products other than watches.